Series / Princess and I 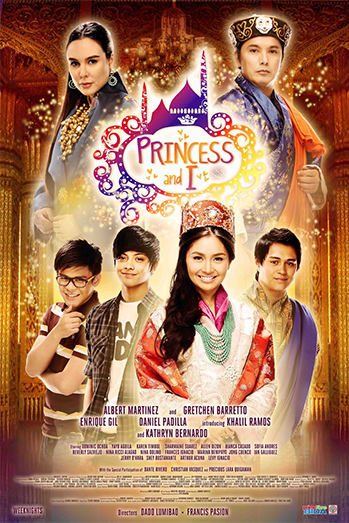 Princess and I is a Philippine teleserye starring Kathryn Bernardo, Daniel Padilla, Enrique Gil, Gretchen Barretto, Albert Martinez, and Khalil Ramos together with an Ensemble Cast. It aired on ABS-CBN from 2012 to 2013.

The plot follows Maria Mikaela “Mikay” Maghirang (Bernardo), an Ordinary High-School Student who wins a free trip to the fictional country of Yangdon. Unbeknownst to her, however, she is actually its long-lost crown princess. To complicate matters further, she attracts Dasho Jao (Gil), the son of the woman responsible for the assassination attempts that led Mikay to the Philippines.

Apart from Jao, Mikay also has two other main suitors: the Troubled, but Cute rich-brat-turned-underdog Gino dela Rosa (Padilla) and boy next door Kiko Salamat (Ramos). The fact that Mikay has three main suitors was one of the series’ main pulls, with ABS-CBN purposely stoking Ship-to-Ship Combat among the fanbase. The narrative clearly favored Jao, however, building him up to be Mikay’s One True Love — until the overwhelming fan support for Gino dela Rosa compelled the writers to give him more prominent Character Development and an increasingly stronger fighting chance to win Mikay’s heart; eventually culminating in the series’ ending being rewritten for good. (Bernardo and Padilla would later solidify their moneymaking power as a Teen Idol onscreen duo in a steady stream of top-grossing projects, such as She's Dating the Gangster.)

The Filipino Channel has the series available on demand.

BEWARE OF UNMARKED SPOILERS. This is a heavily serialized show with a linear plot.

Princess and I provides examples of: