Literature / Return of the Mummy 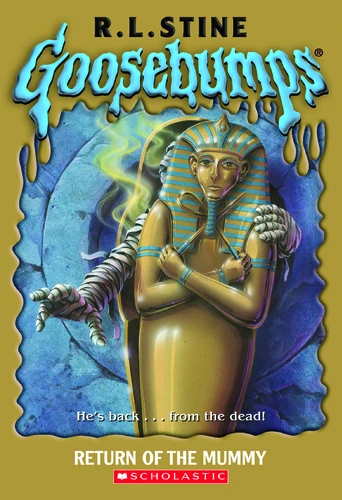 The Goosebumps book in which a mummy returns, but not the one from the last mummy adventure.

A year has passed, and Gabe is once again visiting his uncle Ben and cousin Sari in Egypt, where Ben has finished excavating the pyramid. Or he's excavated another pyramid; it's unclear. Anyway, Ben's colleague, Dr. Fielding, urges him not to open up the inner chamber due to it being explicitly cursed. Dr. Fielding proceeds to act shady for the entire book. Could he know more than he's letting on? Well, at least the heroes can trust the beautiful journalist from the Cairo Sun who is obviously only taking a professional interest in the happenings.

This book was loosely adapted in to the ninth episode of season 1 of the TV series, with a novelization based on the episode being released as book 4 of the Goosebumps Presents series.

It was reissued in the Classic Goosebumps line in 2010 as a companion release to Slappy New Year!.