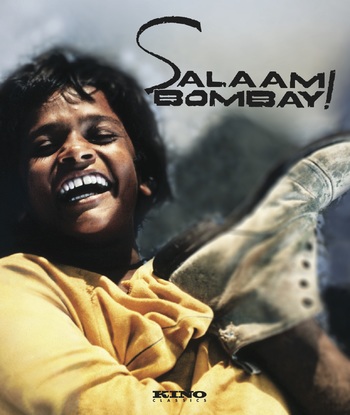 Salaam Bombay! is a 1988 film from India directed by Mira Nair.

Krishna is a boy of 12 or so, homeless, living in the streets of Mumbai aka Bombay, with a little circle of friends that sleep in an alley. He is working as a delivery boy for a tea shop, toting a tray with single glasses of tea on it, making a meager few rupees a day from the tea shop owner, from which he gets docked if someone steals a glass of tea or someone breaks a glass.

Krishna is living in the Kamathipura

district of Bombay, a notorious Wretched Hive filled with brothels, Streetwalkers, drug dealers and drug addicts. Among those drug addicts is Chillum, who is addicted to "brown" (heroin?) and also sells it on the streets for a drug dealer named Baba. Baba also happens to be a pimp, married to a thirty-ish prostitute named Rekha; they have a daughter named Manju who is a little younger than Krishna. If all that isn't depressing enough, a 16-year-old girl named Sola Saal has been forced against her will into a brothel in the neighborhood. She's a virgin and the creepy Miss Kitty of the brothel very much wants to sell off Sola Saal's virginity, but the girl has to be "tamed" first.

Irrfan Khan, who would go on to be a major star in Bollywood cinema, made his film debut. He appears briefly as a professional scribe who writes a letter for illiterate Krishna.