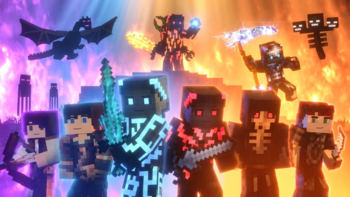 The Thumbnail for the movie of the first season, featuring some of the lead characters note (from left to right) Abbigail, Lucan, Thalleous Sendaris, Ingressus Voltaris, Tygren Voltaris, The Necrolord, Grim, and Jalkar Bowmani. Not pictured: Niika, Achillean Nestoris, Senn, and Igneous. And that's just the first season.
"There was a time, when Enderknights ruled the land and their dragons soared the skies. The Nether clashed in battles of unimaginable force. The undead were a menacing threat to be feared and even the Ardoni clans wielded great Songs of power. That time is over."
Advertisement:
"I believe that time is coming again."
Sulliman and Thalleous Sendaris conversing in Episode 4.

Songs of War is a fantasy animation series based off of Minecraft. It was created by Black Plasma Studios

, and was in production for over three years before the release of the first episode on November 23rd 2019. The series is complete with voice acting (a first for Black Plasma Studios), an original soundtrack, a fully to-scale world built in game, and much more! The series was directed by David R.B. (also known as Arbiter) and co-directed by Samuel Kyber.

The series takes place on the fictional world of Ardonia, home to a species known as the Ardoni who have to the power to wield objects known as the Songs, which grant them unique abilities. Other species in Ardonia include Humans, Felinas, and Magnorites, all of which are seen prominently in the series.

The series' first season ended on March 28th, 2020. There was a mid-season break between January 18th and February 29th, 2020. Despite the series being popular among the channel's own fanbase, it failed to reach a high enough level of success, and was cancelled on June 14th, 2020. The script

for seasons 2 and 3 was released to the public, letting people to read the continuation and end of the story in that form.

Fortunately, a number of animators that were involved in creating Songs of War, as well as several volunteers, founded the Knights of Ardonia

(named after the in-universe organisation) in an attempt to move forward with the script that's now available to the public, serving as a structured Continuation for the series. Their first episode is due to be released on Deccember the 18th 2021.

The playlist for the series can be found here

The soundtrack can be found here

Tropes regarding Songs of War: