Thunderbirds Are Minecraft is an Minecraft fan-animation YouTube series created by Sam Grant of Channel F.A.B.

, based on the pre-existing Thunderbirds Are Go Television series. 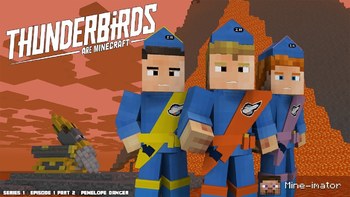 The remastered thumbnail of the Pilot
Advertisement:

Loosely based on the plot of the TV series, Thunderbirds Are Minecraft follows the exploits of International Rescue, commanded by the five Tracy Brothers - Scott, Virgil, John, Gordon and Alan - who pilot the incredible Thunderbird machines (albeit rather squarish versions) to combat both natural and man-made disasters. Joining them in their quest to save the day is martial arts expert and head of security Kayo Kyrano, genius engineer Hiram "Brains" Hackenbacker and their London Agents, Lady Penelope Creighton-Ward and Aloysius Parker. However, a dark force known only as "The Hood" threatens to destroy their existence by wreaking havoc across the world in attempts to lure International Rescue to him.

The show consists of two seasons containing seven to eight episodes around ten minutes in length, as well as two fan-movies, Thunderbirds Are Minecraft: The Movie and International Rescue: A Minecraft Movie. A third animated movie, Tracy, is currently in the works.

Despite being relatively unknown and underrated, the pilot episode in 2015 still amassed over twenty-thousand views. You can watch the series here.

This fan-animation contains examples of: