Web Animation / Song in the Sky 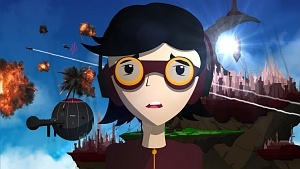 In a world where the ground is lost to legend, an emotionally-damaged fighter pilot must defend her floating city from eldritch monsters.

Song in the Sky is an indie animation on YouTube about Angela, a fighter pilot who fights off Eldritch Abominations in the sky in an apparent post-apocalypse.

Has an official site with various bits of background details and Word of God here.