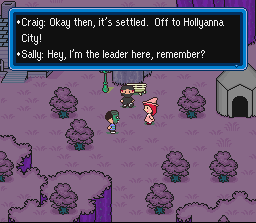 From left to right: Craig, Clyde and Sally. And to think, all they wanted was a few extra pieces of candy.
It’s October 31st, 2010. Halloween night. Sally, Clyde, and Craig are excited to go trick or treating this year. But while trick or treating, they suddenly find themselves thrust into a strange and hostile world. Can they find the source of the problem and stop it, all before school next morning?
The official summary by the hack's creator
Advertisement:

Hallow's End is a EarthBound ROM Hack made by "H.S." set on Halloween night, 2010. In many ways, people in the EarthBound fandom consider this to be the Lighter and Softer Halloween alternative to The Halloween Hack. It also gets a lot of comparisons to Costume Quest, though the plot is quite different from it.

The game stars Sally, Clyde, and Craig, setting out on Halloween night to go trick-or-treating. After a brief run around town, and rather depressed at the haul this year, the kids were about to head home, when Craig suggests possibly seeing if old man Gantt's house has any candy left. Reluctant at first due to the rumors surrounding him, the kids eventually agree to check it out. Upon reaching the house and finding no one there, the kids eventually return home, disappointed that they worked up the courage for nothing.

However, things quickly take a turn for the strange, as no sooner do they leave the house do monsters begin littering the streets, as well as getting accusations of being monsters themselves their way, and the few that do realize they're not monsters no longer remember who they are and, notably, no one seems to be dressed up for Halloween anymore, or even know what Halloween is...

The hack is surprisingly well put together, reconstructing the maps from the ground up to create completely new areas not seen in the original EarthBound, as well as a plethora of new enemies and containing a plot that, while has some dark moments, manages to stay true to the EarthBound experience. With a surprising amount of playtime to it, rivaling that of SNES games of old, it's definitely a must see for any EarthBound fan, even if it isn't around Halloween time.

The most recent patch for the game can be found here.

The hack uses its own patch file made specifically for EarthBound and can't be applied with an ISP patcher, and instead requires its own patcher to apply it and play. Said patcher can be found and downloaded here.

You'll have to search out your own ROM though, as per-Wiki policy.

For a much, much darker Halloween EarthBound hack alternative, check out The Halloween Hack.