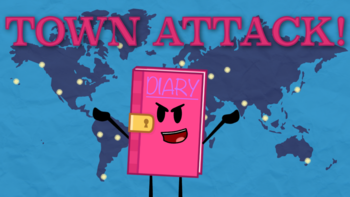 Town Attack is an object show created by OpalStatus (Natalie Birchak) on 19 July 2017.

Instead of following the Total Drama-esque competition setting that Battle for Dream Island had set the standard for countless object shows, Town Attack is inspired by The Ridonculous Race in which 12 teams of two trek across the globe in order to win the grand prize of one-hundred-thousand dollars. Unfortunately, it falls victim to the dreaded cancellation due to OpalStatus wanting to focus on her other object shows. Thus, Town Attack will be finished after its fourth episode which would premiere on 6 November 2020

Meet Diary, the host of the show, and the 24 competitors partaking in this intense leg-race where only one pair can be the victors of Town Attack. But first, the teams must overcome the adversaries of getting lost in foreign countries, lagging behind in challenges, and of course, each other.

The globe-trotting journey awaits by watching the episodes here