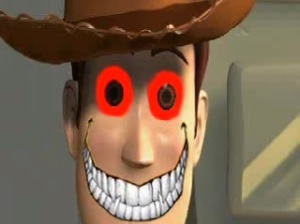 You Wan'it?
"All caught on camera for your enjoyment" - Said at the beginning of the original video's caption.

, a YouTube Poop of Disney and Pixar's Toy Story, is one of the most famous YouTube Poops on YouTube. It was uploaded by Boogidyboo on October 28, 2007, but was removed due to a copyright claim in 2010. It has been re-uploaded by many other users, however.

Being something of a Trope Codifier to the entire YouTube Poop genre, during its run, it had amassed over 1 million views on YouTube, making it the most viewed YouTube Poop on YouTube at the time, while giving the rise and attention to a Fountain of Memes and tropes often seen in many YouTube Poops to this day.