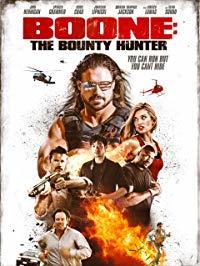 Boone: The Bounty Hunter is a 2017 film featuring John Morrison as the title character of Boone, Spencer Grammer and Osric Chau as his assistants, Kat and Denny, and Quentin "Rampage" Jackson as himself. Boone: The Bounty Hunter is an in-universe reality TV show following Boone as he takes down criminals on camera, usually shirtless, while spouting his catch-phrases as often as possible. Before the filming of the final episode of their sixth season, they learn that the network plans to shut them down due to declining ratings. Boone hatches a crazy scheme for a blockbuster final episode, using a contact at the DEA to learn about Ryan Davenport, the son of drug lord Cole Davenport, who has jumped bail for Mexico. Everything goes smoothly, and Boone has Ryan ready for extradition. Unfortunately, Cole has Kat and Denny, and practically owns the town.