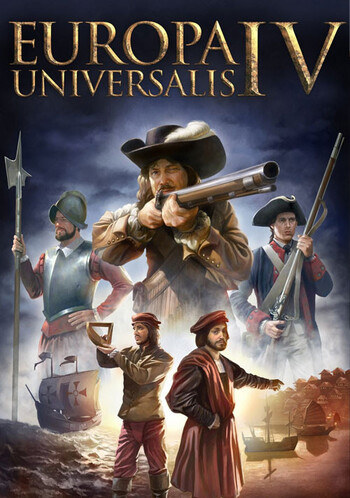 A not overly-accurate arquebusier may be about to shoot the guy to your right.
Advertisement:

Europa Universalis is a series of historical turn-based / real-time 4X Grand Strategy games for the PC and Mac (based increasingly loosely on a licensed French board game). Starting in the Late Middle Ages, it focuses greatly on the Early Modern Period. The games are produced, developed and published by Paradox Interactive.

Thus far there are four main games and a spinoff in the series:

Europa Universalis has you take control of a nation from roughly 1400 to the early 1800s. There are roughly 200 playable nations, although some are more playable than others. While not every nation is in the game, a good chunk of them are, and so apart from standbys like France or Britain you can try your hand at a world conquest as the Iroquois, the Duchy of Bavaria or the Sultanate of Adal. Or Sweden.

The games have a history of buggy releases and somewhat impenetrable interface, with a variety of concepts not being adequately explained by game documentation (sometimes because they weren't in the original release version...), making the learning curve something of a learning cliff, and this is arguably the least complex of the Paradox Interactive strategy games.

The games also have an impressive community of writers, whose dabbling in the artform known as After Action Reports is nothing to sneeze at. Some of their works are simple gameplay narrations, but others are intricate works of fan fiction indeed.

Europa Universalis is closely linked to three other series of grand strategy games, all of them made by Paradox: Crusader Kings, Victoria: An Empire Under the Sun and Hearts of Iron. Theoretically, they can all be played in one big historically chronological succession thanks to a pretty brilliant (though somewhat buggy) Old Save Bonus system created by the developers, and the modding community will often create their own converters to fill in any gaps.

This game series provides examples of the following tropes :