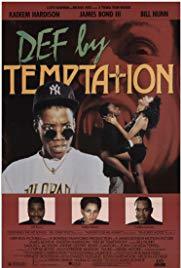 Joel (James Bond III), a disillusioned Minister arrives in New York City to visit his old childhood best friend K (Kadeem Hardison), a struggling actor who moved to the city years ago in order to become a star. One night while at the night club K comes across Temptation (Cynthia Bond), who he calls the “perfect woman”. Her other name is Temptress, and is actually a succubus- who seeks the blood of any man who is foolish enough to be tempted by her. Joel quickly becomes ensnared by her lust, and K suspects that something about Temptation is seriously wrong and enlists the help of Dougy (Bill Nunn), a cop who specializes in cases of the supernatural, who has already pinned the succubus as the culprit to a series of murders around the city. It becomes clear that in order to save Joel and other would be victims it’s up to them to destroy the succubus before she strikes again.