All spoilers for The Maze Runner and Maze Runner: The Scorch Trials are unmarked. You Have Been Warned! 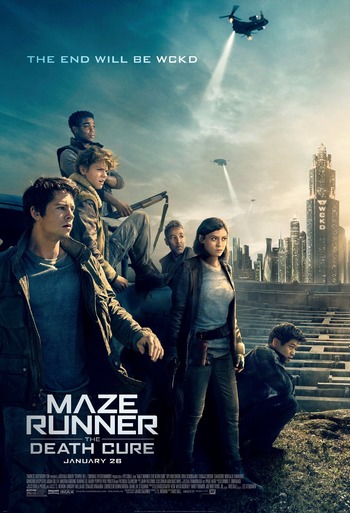 Every maze has an end.
Thomas: How many kids do they need to round up, torture, kill? Huh? When the hell does this stop?
Teresa: It stops when we find a cure.
Thomas: There is no goddamn cure!
Advertisement:

Picking up one year after the events of The Scorch Trials, Thomas and the surviving Gladers continue their search for a cure for the Flare. Along the way, they must rescue Minho from captivity and fight against WCKD for the last time.

The Death Cure was released on January 26, 2018. Filming began proper in March 2016, with Canada and South Africa as shooting locations.