Literature / Have Space Suit  Will Travel 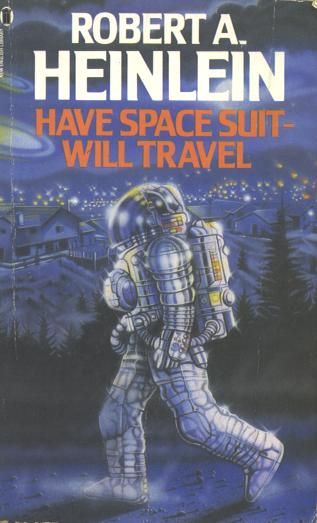 A novel by Robert A. Heinlein, first published in 1958. Widely considered to be one of the best of his young adult novels.

Set 20 Minutes into the Future (of 1958, that is), the plot centers around Clifford "Kip" Russell, a young man who writes a whole bunch of advertising jingles for Skyway Soap, hoping to win a trip to the Moon. He doesn't come in first, but close enough to it to win a spacesuit. After spending a great deal of time and energy restoring it, Kip decides to sell the suit to help pay for college. He takes it for a final drive first — unfortunately, this results in him being kidnapped by a voracious alien he ends up calling Wormface. The alien is also holding captive a little genius girl named Peewee and a strange, mink-like creature Kip calls the "Mother Thing".

Kip, Peewee, and the Mother Thing find themselves in Wormface and his fellow aliens' secret base on the moon and manage to escape, albeit briefly. After the failed attempt, the wormfaces decide to move the prisoners to an even more remote base on Pluto. There, the Mother Thing attempts an escape by setting up a beacon to contact her people, but seems to be fatally injured before she can activate the beacon. Kip completes the task and ends up almost dead himself. It turns out she was fine — her species isn't bothered at all by being frozen solid, other than the not being able to move part.

Fortunately, they are rescued and Kip receives advanced medical treatment by the Mother Thing's people. Unfortunately, the Mother Thing's people like to judge new races to see if it's safe to let them join galactic society. Kip finds himself called upon to defend humanity's right to exist alongside a dumb Neanderthal and a racist Roman legionnaire named Iunio, who were brought millennia into the future to account for all of human history.

In what may be the quintessential Heinlein ending, mankind wins the right to live, everyone gets home safe with scientific proof of their adventure, and Kip gets a free ride to MIT.