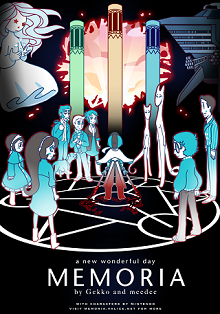 "There is power in your memories. Look deeply through your past, but reserve recalling your best times for moments when you really need to. Every time you relive a memory, the chemicals in your brain change how your mind perceives it. Eventually, your most precious moments may become a blur of truth and falsehoods. Memoria

is a story about memory. There are few things more important."
— Gekko, the series' writer
Advertisement:

An undisclosed amount of time after Mother 3's rather Ambiguous Ending, we have Memoria.

Created by sibling team Gekko and Meedee, Memoria has a new chosen four go on a grand adventure, initially starting as a Brother–Sister Team that leave their hometown to look for their missing brother, meeting familiar and unfamiliar characters to the Mother fandom as their quest progresses; discovering new truths about the mysterious world they live in. As the name suggests, this comic has an underlying theme of memories, serving as a major theme throughout its narrative and characters. At the center of it all lies an ultimate truth, one the creators believed would be difficult to comprehend, but would explain why it is the way it is and bring together the elements of all three Mother games.

The comic acts somewhat as an indirect continuation on Gekko and Meedee's previous Mother comics, Harmony and sister story The White Ship

, which served to tie together EarthBound and its sequel by acting as an Interquel story involving many familiar faces and new ones alike. While reading these is not required to enjoy it, elements of them do appear in Memoria's story, so it is still recommended to read them first.

, the comic updated every Monday, Wednesday and Friday in its thread on Starman.net where it can still be found (with a more complete index being available here

), running from June 19th 2010 to June 11th 2012. Unfortunately, the authors eventually came to a reluctant decision to end the comic after six chapters due to difficulty balancing working on the comic with life. However, they did post the complete scripts for the remaining chapters, epilogue, and a special focused on the character of Penny that was set to run alongside the comic here

, allowing the full story to still be viewed for those who wish to read it.

Not to be confused with the defunct MSPA Forum Adventure, .Memoria, which used to be on this page. Or with the 2013 sequel to the German adventure game The Dark Eye: Chains of Satinav.