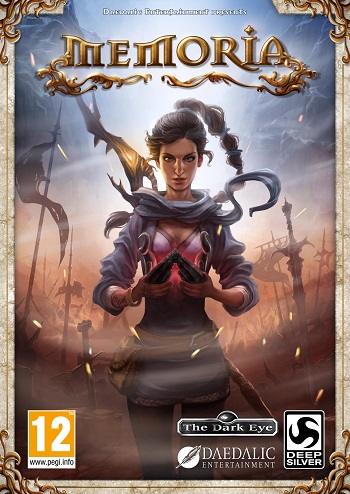 Memoria is a 2013 point-and-click adventure game by Daedalic Entertainment, and a direct sequel to The Dark Eye: Chains of Satinav.

Several months have passed since the events of the previous game. Memoria kicks off with Geron, now recognized (by some) as the Hero of Andergast, searching for a magical cure that can transform Nuri back into a fairy. His investigation leads him to Fahi, a traveling merchant who, it is said, possess magic that allows him to transform any object into any other object. Fahi offers Geron a deal - he will put his magic at Geron's disposal, if Geron can solve the following riddle within three days:

As the stone rules over the scarab, so rules the scarab over the stone. Enter if to you the answer is known. If not, then forever your life I'll own.

This riddle was inscribed over the door of the tomb of Malakar, a Moghul mage of a bygone age who wielded a powerful Mask of unknown providence and power. Fahi believes the riddle is the key to understanding the story of Sadja, a princess of Tulmidya who looted Malakar's tomb, took his mask and his staff, and participated in the battle against the demons in the Gorian desert centuries ago. Fahi and his daughter have had persistent dreams of Sadja's life, and want to understand how her story was resolved.

Of course, it's not as simple as a word game. Geron starts having dreams of Sadja as well, and resolves himself to sorting out the mystery of Sadja's life in addition to solving the riddle and keeping Nuri safe.

Throughout the game, the perspective of the player keeps switching back and forth between Geron, acting in the Low Fantasy present, and flashbacks of Sadja, acting hundreds of years before in the High Fantasy past. Their stories are interrelated, although neither of them understands that at the start...

Not to be confused with the webcomic of the same name, or with the defunct MSPA Forum Adventure, .Memoria.

The page contains unmarked spoilers for Chains of Satinav. Read at your own risk.