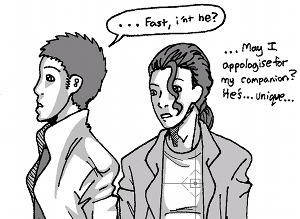 Meanwhile Upstairs by EveryDayArtist is yet another Buildingverse Fan Webcomic. This one begins with a some new tenants: John f-ing Taylor, Doctor Spencer Reid and Agent Derek Morgan, and also focuses on characters who don't get as much limelight in other series, like Aziraphale, Crowley, James, Javert and supporting cast members from Les Misérables.

To date it's more of a Gag-per-Day Webcomic (or two-three days umm pages) with no overarching storyline than other most additions to the 'verse, but who knows what the future brings.