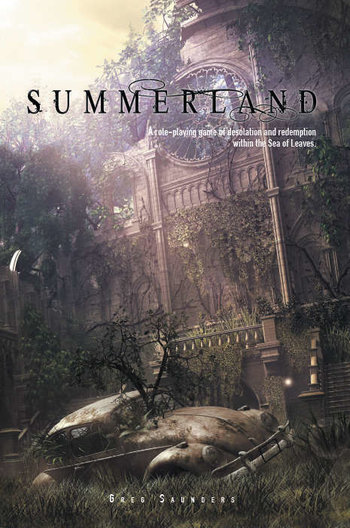 A role-playing game of desolation and redemption within the Sea of Leaves.
Advertisement:

Summerland is a 2009 tabletop role-playing game designed by Greg Saunders, centering on themes of isolation and alienation.

In a time not too distant from our own, a strange cataclysm occurred, called the Event, where a vast primeval forest — the Sea of Leaves — seemingly just sprang into being, destructively overlaying itself over human civilization. While many died as buildings collapsed around them and more were lost to hunger and sickness in the wake of the disaster, the greatest danger was much more unusual. The new forest exerted a kind of psychic Call, urging humans to come under its eaves and lose themselves in its depths, until eventually their memories fade and they become little more than animals. Within a few years of the Event, most of humanity was lost to the Call.

Only two things can drown out the Call. One is community, forcing surviving humans to band together in whatever protected spaces they could find so that the force of their shared lives and bonds can dampen out the Call. However, this protection doesn't go far, and while survivors can wander into the woods by day with little to fear from the Call they must return before night falls and the Call grows much stronger. The other is severe mental disturbances, typically ones induced by trauma, which allow their bearers some measure of individual protections. These people, the drifters, are some of the few able to spend more than a single day outside of a settlement, and are consequently invaluable in helping other survivors communicate, explore and retrieve valuable goods or information, even as their mindsets make them scorned and unable to fit into society themselves.

Even as humanity slowly dwindles, however, the forest's animals become stranger and more cunning, wanderers tell tales of spirits and frightening apparitions, and strange things stir beneath the canopy of the Sea of Leaves...

Not to be confused with the young adult novel of the same name.