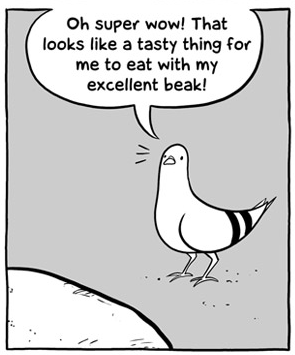 Holy wow! Let me tell you about City Face, my fine friends!

City Face is the super awesome and also summer blockbuster movie about City Face who is simply the cityest and the faceyest of all the awesome pigeons! He does his own stunts and his own fancy dances and his neck feathers are just the shiniest! SWOOOOOOOON

...Sorry about that. That’ll be the last time we let a pigeon write a wiki article.

Anyway, City Face is the story of a pigeon named City Face and his Mundane Made Awesome adventures in Birmingham, England. In the first installment

, City Face learns from the fairy Polo how to dance and win the love of the attractive Female Pigeon—and in so doing, he saves the world... somehow. In City Face 2

, City Face comes into conflict with a “strange shouty magpie” named Bobeyes, and learns the ins and outs of becoming a human businessman.

Although City Face is a recurring bonus comic in the Gunnerkrigg Court archives, and it shares a few characters with GC (and, according to Word Of God, the two are canon with each other), there’s precious little overlap in terms of plot.

What makes these weird mini-stories work is the writing: the various non-human characters use bizarre (but oddly appropriate) diction and operate on foreign logic. Adding to the absurdity, Tom Siddell’s commentary below the pages refers to City Face as a Summer Blockbuster and explains how the Animated Actors worked their magic, both on and off the camera. Furthermore, the Shout Box was commandeered by birds, fairies, and other in-universe characters (though these comments aren’t preserved in the archives, the Gunnerkrigg Court wiki has screenshots: here

If, somehow, you find yourself desperately in need of a print copy of City Face’s grand adventures, then you’re in luck: they’re included in the hardcover print copies of Gunnerkrigg Court, specifically volume 2, Research, and volume 3, Reason.

A City Face print collection, including new content not available online, has been released under the title City Life With City Face.