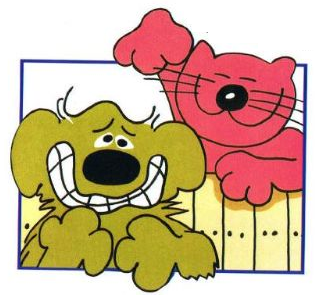 Roobarb is a cult British animated series (a milestone due to being the first fully hand drawn one of its region) that ran for 30 episodes in 1974. Each of the five-minute stories involves the antics of eccentric lime green dog Roobarb, often taking on some new elaborate pastime and letting his imagination get the best of him, often dragging his sometimes antagonist-sometimes friend, Custard the next-door cat, into the misadventure, while the unruly birds act as a Greek Chorus to whole endeavour.

The series was created and written by Grange Calveley and directed by animator Bob Godfrey, who utilized a distinctive rough style with a sketchy felt marker technique (a style he would retain for a later project, Henry's Cat).

The show had a more obscure run in the US, with dubbed episodes appearing as segments of Eureeka's Castle.

The show would be revived in 2005 as Roobarb and Custard Too, a 39 episode series (also penned by Calveley) which was thoroughly loyal to the original, outside a few extra characters and modernized plots. A series of books have also been published. Both series were narrated by Richard Briers, who passed away on February 17th 2013, with Bob Godfrey following four days after.

When there were tropes:

The intro to the animated series Roobarb, one of the defining examples of the line boil technique.

The intro to the animated series Roobarb, one of the defining examples of the line boil technique.