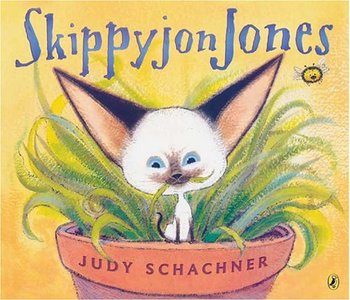 The Skippyjon Jones series by Judith Byron Schachner stars the eponymous Cloudcuckoolander Siamese cat, who thinks he's a Chihuahua, much to the dismay of his mother. Whenever he's alone, he hides in the closet, hang outs with an imaginary group of chihuahuas and goes on crazy and fantastic adventures with them, with plenty of English and Spanish wordplay hit back and fourth.

The first book, simply named Skippyjon Jones, was released in 2003, with the latest entry so far, Snow What, released in 2014. The book series is intended to introduce basic Spanish to English-speaking children, although it has attracted controversy for allegedly being offensive to Mexicans.