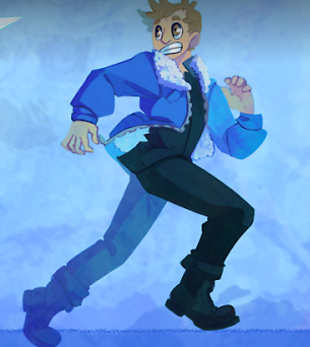 "Okay, let’s get this show on the road."
—Loreweaver, first post of his first episode of Steven Universe.

Loreweaver Universe (aka William French) is a blind (unspoiled) liveblogger on Tumblr who grew popular through his humorous liveblogs of episodes of the cartoon Steven Universe. He's known for a sarcastic style of humor mixed with intelligent analyses and breaking down into incoherency in proximity to his favorite characters.

) where he played many video games, including Minecraft (which he's not proud of). He streams games as a part of his Patreon reward tiers.

On April 2020, Lore completed liveblogging Steven Universe. He has also watched and finished the show Over the Garden Wall, has started (but put a hold on) Puella Magi Madoka Magica, and is currently watching She-Ra: Princess of Power, A Place Further than the Universe, and Paranoia Agent.

His blog is here

. His Patreon can be found here

. Also, in September 2016, he restarted a Website/YouTube channel, this time under his own name