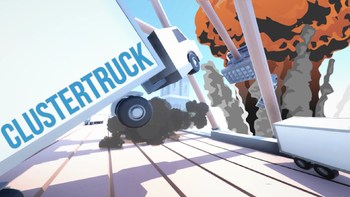 This is basically the whole game.
Advertisement:

Clustertruck is a high speed platforming game in a First-Person perspective developed by Landfall Games and published by tinyBuild in 2016. It is available on PlayStation 4, Xbox One, Windows, Mac, and Linux. The game's basic idea is you are jumping from a multitude of trucks, in what you would loosely describe as a cluster, and that is basically it, just jump.

The game operates on a level to level base going through a total of 9 worlds, each one based on a unique setting, with 10 levels each. After each level, you get rewarded with "style points", the amount of which depending on how fast you finished the level and on stunts you may have done. You can then spend these points to buy various abilities, such as a Double Jump or a Grappling-Hook Pistol, to finish earlier levels even more quickly or to make later levels easier to beat. The game also features Twitch integration allowing many odd effects based on the chat's (And if they're feeling particularly sadistic, the devs themselves) whims.