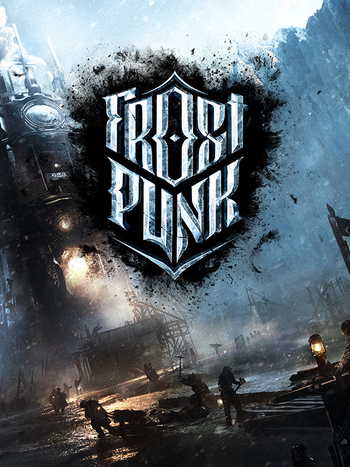 The city must survive.
Advertisement:

Frostpunk is a survival-based city-building game released on April 24th, 2018 by Polish developer 11 Bit Studios, the makers of This War of Mine.

The game is set in a post-apocalyptic 1888, where ice storms have ravaged the world and left only small pockets of civilization around heat-giving generators.

Unlike the majority of city management games, the game includes emotional and survival aspects with having to manage meagre resources and passing laws to prevent the populace crossing the Despair Event Horizon, which involves giving them hope to survive by working together, or by fear and terror and forcing them to do your bidding under penalty of death. The default scenario, A New Home, has the player assume the role of a Captain who's in charge of New London (named as such if the city survives); additional scenarios (The Arks, The Refugees and The Fall of Winterhome) involving other locations are unlocked after surviving for 20 days in A New Home. Later on, an "endless mode" was added, with different settings: Endurance, Builders (where players have to build a generator) and Serenity.

The developers added a handful of new DLC expansions:

A sequel, Frostpunk 2, was announced in August 2021, set in the same universe 30 years after the first game, following a new technological breakthrough with the discovery of oil.

Frostpunk contains examples of these tropes: