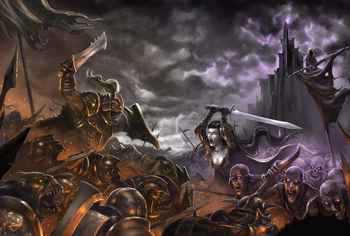 Kings of War is a fantasy war game developed by Mantic Games.

Initially released as a range of miniatures without a set of companion rules, Mantic Games announced in July 2010 that a set of rules was under development.

The game was first announced in early 2010 as a closed beta. The 2010 edition of the game was released in September 2010 with the Mhorgoth's Revenge starter set. The rules were finally published as a download from Mantic's website in December 2010. An updated version the rulebook is due for release in the summer of 2015 and features a cleaned up set of rules, new units in every army and extensive public playtesting to make the armies and game as balanced as possible.

It draws many inspirations from The Lord of the Rings and Warhammer Fantasy miniatures, though more recent additions are completely unique.