Literature / The First Voyage Around The World 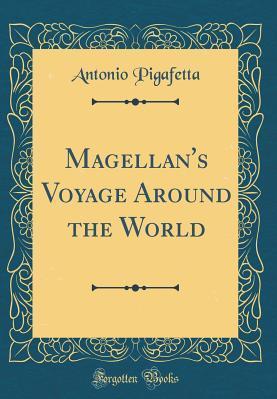 The First Voyage Around The World, also known as Magellan's Voyage Around The World in the English language, is a written account of the three-year (1519-1522) expedition around the world of Ferdinand Magellan, a Portuguese explorer and his fleet the “Armada de Molucca”, with his expedition sponsored and approved by the Holy Roman Emperor Charles V, who was also known as the Charles I, King of Spain. But not exactly as Magellan doesn’t even reach Spain back as he loses his life on one of the islands of Philippines through a conflict with a certain group of natives in which the first national hero of the Philippines, Datu Lapu-Lapu, belonged to. His body never returned to Spain as well. Hence the journey is also called the Magellan-Elcano circumnavigation as Spanish navigator Juan Sebastián Elcano led the return trip to Spain.

Before it was published by an Italian historian, geographer and travel writer Giovanni Battista Ramusio between 1550 and 1559, Antonio Pigafetta, an Italian scholar, chronicler and one of the few lucky crew members to return from the expedition, wrote about the tales and experiences of their western circumnavigation of the world in the “Report on the First Voyage Around the World” (Relazione del primo viaggio intorno al mondo) in Italian between 1524-1525 and his accounts were distributed to European monarchs in handwritten form. Unfortunately, the original document was not preserved.

This travel narrative is very well known for history enthusiasts that while it has somewhat fantastical accounts like the fleet encountering giants in Patagonia, it has earned a reputation for its remarkably accurate ethnographic and geographical account of the circumnavigation and for one the early contacts of the Europeans to the Pacific Islands and East Indies, more widely known today as the Southeast Asia and their interaction with some the natives of the pre-colonial Philippines (please do note that Philippines as a country didn't exist yet, and friggin' smartasses will mention this).

A product of its time, there may be some things said in the book that wouldn’t fly well in the current 21st century as there are some descriptions that questions the morality of the fleet because of certain acts and also knowing that this was a Spanish fleet at the time of the Age of Exploration, also downplaying, softly speaking, the cultures they encountered along the way.

Interestingly, this account became the main source for, of all things, a children's animated movie: the 2019 Spanish 3D animation Elcano & Magellan: The First Voyage Around the World, which takes great liberties with the events of the expedition and was controversial in the Philippines for portraying natives in an inaccurate and stereotypical light.

Tropes in The First Voyage Around The World include: