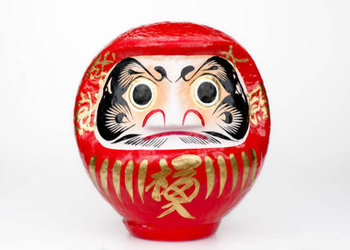 A Daruma doll is a traditional round Japanese doll modelled after Bodhidharma, the founder of the Zen tradition of Buddhism. They are commonly red and depict a bearded face, but can appear in many different colours. The dolls are weighted at the bottom, so stand back up if they are pushed over, hence they are often paired with the Japanese saying "Nanakorobi Yaoki", "seven times down, eight times up", an expression of perseverance against misfortune.

Bodhidharma, who is known as Daruma or Dharma in Japan, is famous for having meditated alone, facing a wall in a cave for nine years. According to popular legend, this intense meditation made him lose the use of his arms and legs, which is why Daruma dolls are limbless. Bodhidharma supposedly cut his eyelids off to prevent himself falling asleep, which is also why the dolls have wide, staring eyes.

Daruma dolls are often given as gifts because of their connotations with perseverance and luck. They are usually sold without pupils, as the receiver of the Daruma is meant to paint in one eye (to represent a task they must overcome) and then the other eye (when the task is complete).

Daruma dolls also appear in media as Daruma Otoshi, a type of game where the objective is to hit a piece out of a stack without the other pieces falling down. Think Jenga, but with cylindrical pieces and a Daruma doll theme.