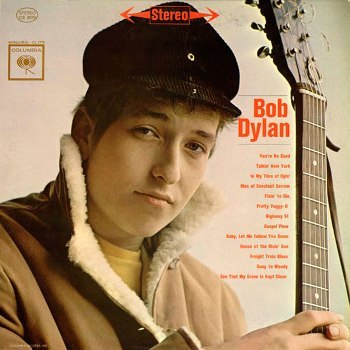 Bob Dylan is the debut studio album by Bob Dylan, released in 1962. It's almost entirely a Cover Album, save for two original compositions "Talkin' New York" and "Song To Woody". Produced and recorded at a very cheap budget it failed to make an impact at the time. Even when the singer broke to the mainstream with his Surprisingly Improved Sequel The Freewheelin' Bob Dylan the next year, Bob Dylan has never quite charted, sold or been acclaimed as high as his other albums. As a result Dylan pretty much dismissed his debut and wrote it out of canon.