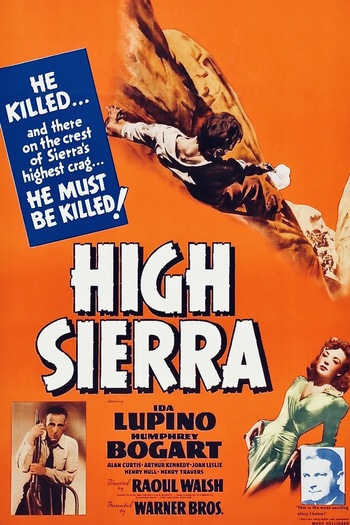 One of Humphrey Bogart's breakout roles that made him a star (along with The Maltese Falcon), this 1941 heist film was directed by Raoul Walsh. John Huston and W.R. Burnett wrote the screenplay, adapted from Burnett's novel of the same name.

Bogart stars as robber Roy Earle, pardoned six years into a life sentence through the machinations of ailing crime lord Big Mac. Earle has been broken out to do one last heist, alongside two young toughs, who disgust him with their lack of discipline and smarts. Earle finds himself out of place in a world that is changing fast. His failed romance with a young Dust Bowl refugee convinces him that he has no place in honest life, but after the heist goes bad, he finds loyal companionship in the form of Marie (Ida Lupino), a dancehall girl from Los Angeles.

Remade by Walsh as the 1949 Western Colorado Territory (starring Joel McCrea and Virginia Mayo), and by Stuart Heisler as the 1955 film I Died a Thousand Times (starring Jack Palance and Shelley Winters).