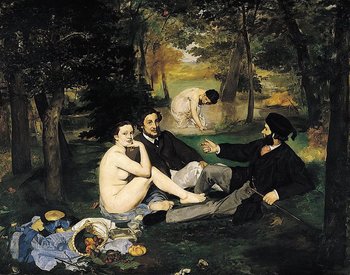 Le Déjeuner sur l'herbe, known to English-speakers as The Luncheon on the Grass, is a 81.9 x 104.1 in (208 by 264.5 cm) oil painting by father of Impressionism Édouard Manet. Originally titled Le Bain (The Bath), Le Déjeuner sur l’herbe depicts two men and two women at what remains of a picnic out in the open. The men are fully clothed, while one woman faces the viewer, having stripped down to nothing, while the other woman is scantily clad in the pond in the background.