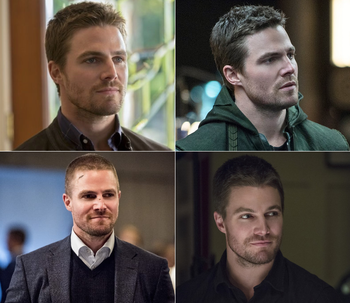 Stubble ain't no trouble.
"I'm trying to think of the last action movie I saw with realistic facial hair. I sometimes wonder how these guys go through days of unremitting action while still finding time off to use an electric shaver on the stubble setting."
— Roger Ebert
Advertisement:

So you're an Anti-Hero, or maybe The Drifter or an equally gritty protagonist Made of Iron. Now, how to get street cred as a badass Mofo? Cause big explosions? Shoot with Guns Akimbo? Nah, just stop shaving!

In the wonderful land of Hollywood, the law of Good Hair, Evil Hair is irrevocably ingrained in concrete. To wit, the only people who don't shave are Action Heroes; everyone else has good hygiene. Even Mooks are better groomed, or are ugly and easily distinguished from our hero.

Especially fun when the hero has a perfectly shaved head (unless naturally bald or getting there) and a five o'clock shadow. Even when starting a film with a perfectly smooth jaw, all it takes for the hero to grow his five-o'clock shadow is the sound of gunfire. Big Damn Heroes don't sweat when anxious; they grow facial hair.

May grow out into a beard if given enough time, unless he keeps it stubbly by choice. Tends to grow on a Lantern Jaw of Justice. Contrast Beard of Sorrow, which is usually temporary. Opposite of the Perma-Shave.

Not entirely unrealistic, as men with dark facial hair but slow beard growth (and especially with lighter skin for contrast) can get a 5-o'clock shadow which then stays perma-stubble for days without any maintenance.

Almost ubiquitous among Mr. Fanservice characters, given the common Female Gaze perspective that facial hair is manly, but too much is unappealing.

For examples of cartoon characters having stubble due to Limited Animation, see Solid Cartoon Facial Stubble.