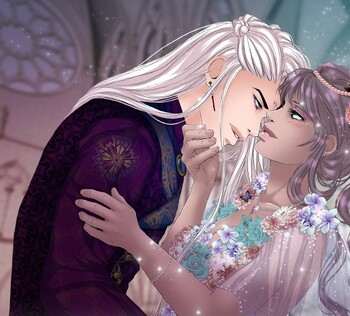 Blood Reverie is a webtoon by Lifelight, the creator of My Dear Cold-Blooded King.

Cassia is a woman with amnesia working as a janitor at a corporation that she is attempting to infiltrate, believing it may have information on her mysterious past.

Yet she also leads a strange double life. For in her dreams, she finds herself in the presence of Grey, a powerful vampire lord in a fantasy world, who finds himself intrigued by her seeming ability to pop in and out of his private chambers no matter what magical defenses he erects.

As these two become involved with each other, Cassia finds herself being drawn into intrigues in both the mundane and magical worlds.