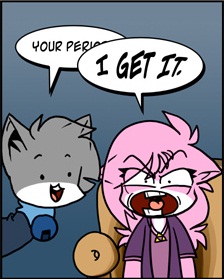 Speech Bubbles are graphic interpretations of characters' speech. Therefore, cartoonists show interruption or talking over another person's speech most conveniently by Painting the Medium — specifically, obscuring a speech bubble with something.
Advertisement:

Obscuring with another speech bubble means that the character is interrupted or drowned out by another. Obscuring

◊ with Written Sound Effects means the same for sounds. Sometimes a speech bubble may even be obscured with an object: Either this object produces loud and specific sounds that drown out the speech or the character stops talking immediately. Or perhaps it just shows that the other characters weren't listening.

The Wall of Blather uses this on Wall of Text to indicate "long lecture that no one listened to."

A form of odd-shaped speech bubble, and so a Sub-Trope of Painting the Medium, often used for Curse Cut Short. When the speech bubble blocks something else, it's Speech-Bubble Censoring. See also Sound-Effect Bleep.