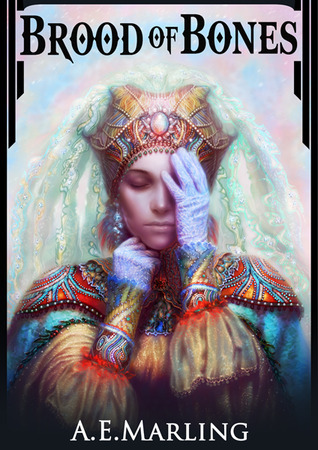 A Sleepy Head Enchantress
My somnolence was part of the goddess’ divine plan. It had to be. Her gift—her curse—gave me tremendous advantage in the study of enchantment because the magic could only be accessed during sleep.
Advertisement:

Some fantasy is Dark Fantasy. This is one of those books. Written by A.E Marling in 2012 its also an Epic Fantasy series with four books in the series as of 2014

Hiresha is an enchantress. A really good one. But she suffers from a form of narcolepsy that causes her to fall asleep at any moment.This makes it hard to her to have a full live and she wants to find a cure for her malady. But she keeps getting caught in tricky situations all over the land of Loam.

about Hireshas life as a young girl.

There is also a "A Gown of Shadow of flames" wich is set in the same world.But apart from the apperance of the Lord of the Feast in both of these they are separate.

[Brood of Bones] contains examples of: