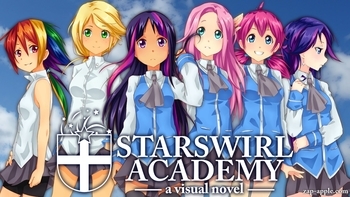 Starswirl Academy is a visual novel created by the Zap Apple Project. Originally based on My Little Pony: Friendship Is Magic, it has since become its own unique story, separate from the show.

You play as a new transfer student, Tom, fresh off the train. Since you're a senior, it seems as though every one of your classmates knows exactly what their talents are. You couldn't be more directionless, but that's why you chose to come here, right? It's time to find out exactly who you are.

A demo was available here

but the site appears to have now been disabled or taken down, and developers have confirmed on their Discord server that the project has been cancelled.

Tropes used in this story are: