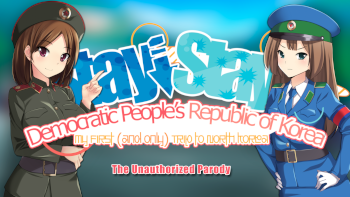 Stay! Stay! Democratic People's Republic of Korea! is a Visual Novel Dating Sim made by the same creators of Panzermadels. The player controls Donald Trump, and sees his journey through Korea while being guided by two North Korean military sisters, Jeong and Eunji. Unfortunately, Donald doesn't understand the differences in culture between North Korea and his homeland, America, so this can hamper his stay in the new country.