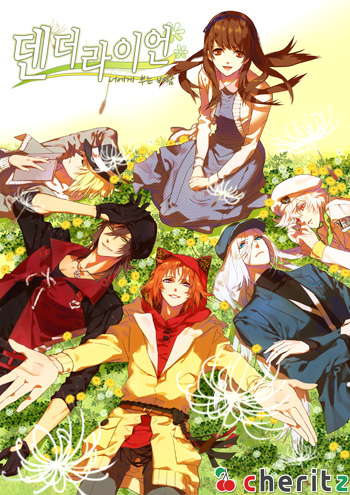 "...the game has begun. What will be your wish?"
Advertisement:

Heejung is not a happy girl. Overwhelmed by her overbearing mother demanding success, she has become stuck in a life she does not enjoy, constantly working and preparing for a future others have set out for her. In an attempt to rebel against these constraints, she joined a university in a different city...only to once again find herself reverting back to previous habits, studying a major she has no interest in and finding almost no joy in her life apart from in the brief moments when she draws. She knows something is wrong with her life, but fear of her mother's reprisal combined with lack of any kind of concrete idea about what she wants from her life keep her where she is.

Then one morning she wakes up to find something strange - a basket of two cats and three rabbits together. Although she doesn't believe she has the time to look after them, she decides to take them in as her own. Over the weeks, Heejung starts to get used to taking care of these pets, as they make her laugh and allow her to feel relaxed in a way she hasn't for years.

And then, one day, all five of them magically transform into attractive men with cat or rabbit ears wearing otherworldly, European-based fantasy-style clothing.

From what she can gather, there is some sort of game going on. The 'rules' prohibit them from explaining, but they are indeed from another world - two fantasy-style kingdoms, that of the cats and the rabbits - and their transformation happened due to Haeejung's 'choice' of one above the rest. Although the boys are now even noisier and more difficult to take care of than ever, Heejung reluctantly lets her stay in her house until they have to leave. And so her life with Boisterous Big Eater Jisoo (the black cat), stuck-up Tsundere Jiwoo (the brown spotted rabbit), cool but gentlemanly Jihae (the silver, long-haired rabbit), cutesy and energetic Jiyeon (the orange striped cat), and young, emotionless Jieun (the white baby rabbit) will begin...

Dandelion - Wishes Brought to You - is a stat-based Otome Game made by the company Cheritz. It was released out of nowhere in late 2012, but its high production values and surprisingly deep storyline were received very well among the community, and another game by the same company, Nameless - The One Thing You Must Recall -, revolving around dolls turning to life instead of pets, came out in late 2013. Dandelion was originally made in Korean, but has an official English translation with surprisingly few errors.