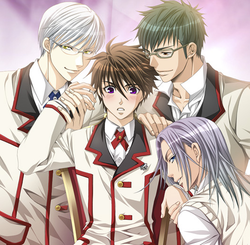 STEAL! is a Yaoi Visual Novel game released in late 2009 by Spray (known for titles such as Gakuen Heaven and Kichiku Megane). Notably quite tame in comparison to other BL games, it's also quite noticeable for the fact that the majority of the voice cast were credited under their real names.

After living a difficult life, Asuka Kobayashi resolves to grow stronger, and, under the suggestion of his father, enrolls in elite all-boys boarding school Kaido Academy. A normal school at first glance, the school is the headquarters of the elite heist group Magnus Pica and operates a secret program under the name "Aesthetics Operations Division" that trains students to steal back stolen artifacts from museums and auctions. Asuka is invited to join, and enters one of its trainee groups Team Griff.

While each member of Team Griff have their own special abilities to contribute to the heist, Asuka has been gifted with "True Eyes" since youth, which allows him to profile objects. However, he's reluctant to reveal it due to being bullied as a child for having them. While preparing for the Magnus Pica mission, he learns to accept his powerful gift and grows close to Team Griff, but soon realizes just how dangerous having True Eyes is.

There are eight love interests in total with three endings each, as well as two neutral endings.

Tropes present in STEAL! include: