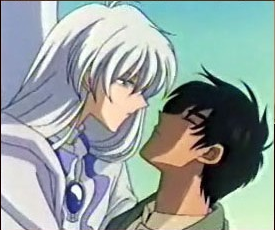 CLAMP is famous for having at LEAST one flavor of Yay in every major work, with lots of implications tossed around but a veritable epidemic of UnConfessions. While this isn't surprising considering the fact that they started out as a Doujinshi circle (with many of their doujin works focusing on male/male relationships), none of their works can be officially categorized as Boy's Love.

For Official Couples and heavier implications, check out this page.