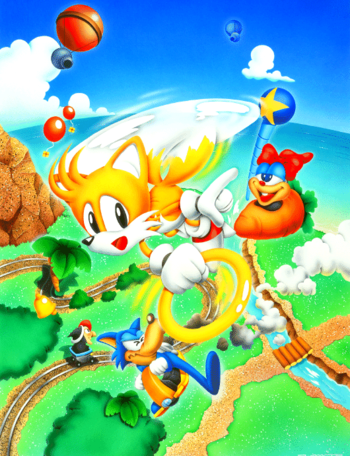 Tails' Skypatrol is a game released for the Sega Game Gear in 1995, developed by SIMS co. Ltd and JSH, and only in Japan (prior to being ported to compilations). It features Sonic's pal Miles "Tails" Prower, in the first of three Spin-Off games the lovable fox cub received. In this game, Tails shoots a ring to grab things, and must save an island from the evil Witchcart, a witch who rides in a mine cart and turns trespassers into crystals.

Notable for being the first game Chikayo Fukuda composed for, who would later go on to compose the music for many of CyberConnect2's games.

A 2003 McDonald's Happy Meal LCD game was also released under the name of Tails' Skypatrol, and keeps the flight based gameplay, but simplifies it into a high score endurance game where you grab rings.