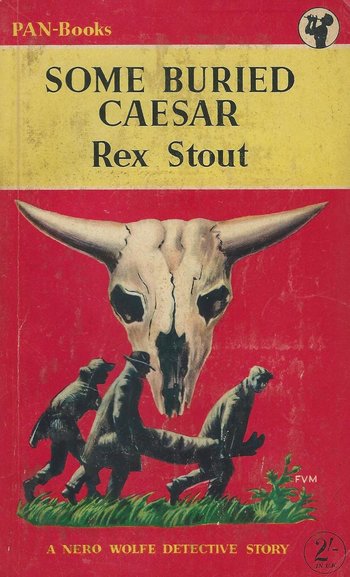 Wolfe nodded. "Astonishing. All about a bull. It might be thought you were going to cook him and eat him."
Pratt nodded back at him. "I am. That's what's causing all the trouble."
Advertisement:

A 1939 mystery novel by Rex Stout, and sixth in the Nero Wolfe series. It is notable for being the first appearance in the series of Lily Rowan, Archie's on-off socialite romantic interest.

While travelling to upstate New York to display orchids at a farmer's exhibition, Nero Wolfe's car experiences a minor calamity. This, in turn, leads Wolfe and Archie Goodwin to have an uncomfortably close encounter with a bull in a nearby paddock while seeking help. After being rescued and recovering with the bull's owner, fast food magnate Thomas Pratt, they quickly learn that the bull is at the middle of a lot of fuss indeed — for the bull is Hickory Caesar Grindon, a champion Guernsey, and to the outrage of the local farming community Pratt intends to cook and serve him at a barbeque as a publicity stunt for his restaurants.

A particularly tense confrontation with Clyde Osgood, the son of Pratt's hated rival Frederick, leads to Clyde rashly betting Pratt $10,000 that Caesar will never eaten. When Clyde is found dead later that night in Caesar's paddock, apparently gored by the bull, the authorities are perfectly willing to write it off as an accident resulting from Clyde's misguided determination to win his bet. But Frederick Osgood suspects murder, and one man doesn't need to suspect — Nero Wolfe knows full well that it was...