Moldova, officially the Republic of Moldova (Romanian: Republica Moldova), is a Eastern European country sandwiched in between Romania and Ukraine. It suffers from a pretty bad identity crisis and is named the second-poorest country in Europe (only Ukraine is worse off)... yeah, suffice to say, the Republic of Moldova has it a bit rough.

First of all, to get a bit of etymology confusion out of the way: "Moldova" is the generic Romanian term for the historical region that was formerly occupied by the Principality of Moldova

between 1346-1859. For the sake of avoiding confusion, English material differentiates between the historical region, which is referred to by the anglicized "Moldavia", and the ''modern region of Romania and country', which are referred to as "Moldova". It can get a bit confusing, sort of like Macedonia—the Greek area or the country. Also, many of the Moldovan and Romanian people have historically held VERY strong (opposing) opinions about whether Moldovan is a language itself, or a dialect of Romanian. The truth behind this is somewhat more involved: The two languages have the same literary standard, although Moldovan was written in the Cyrllic alphabet instead of the Romanian alphabet. (Which is a variant on the Latin alphabet.) Further, Moldova's 1991 Declaration of Independence declared Romanian the official language, while the 1994 Constitution declared Moldovan the national language. A 2013 Constitutional Court ruling ruled that the Declaration of Independence takes precedence, and that the official language was Romanian. For what it's worth, most linguists consider Moldovan and Romanian to be the same language, with Moldovan being a political glottonym more than anything else.

Now, Moldova the region's got a long history and we don't want to bore you with it, so here's the basics. The region first got settled in 1353 by Dragoș, at first under Hungarian control. It was Bogdan the Founder who managed to throw them out in 1359, and named the resulting realm after the Moldova river note popular etymology has it that the river was named in honour of Dragoș's dog Molda, who drowned in it during a hunting trip. The Principality of Moldavia soon covered the entire historical region. A long history ensued, which Romanians and Moldovans know from school but we can't risk Padding now, can we? The most important event here was the 1859 union between the Principalities of Moldavia and Wallachia, which created the United Principalities and officially ended the existence of Moldavia as an independent country. The United Principalities changed their name to Romania in 1866 and later the Kingdom of Romania in 1881.

Still here so far? Good, because it gets a bit trickier now. In 1812, the Treaty of Bucharest was signed, which split the Principality in two: the part west of the Prut River remained independent and later united with Wallachia to form Romania, while the eastern bit between the Prut and Dniester rivers known as "Bessarabia" ("Basarabia" if you're Romanian) got taken over by Russia. The Russians settled various minorities like Ukrainians, Lipovans, Cossacks, Bulgarians, Germans and Gagauzes in the southern sparsely inhabited parts of Bessarabia.

In 1917, Bessarabia took advantage of the chaos of Red October to at first declare itself a Moldavian Democratic Republic within Russia in December. In January 1918, it broke off and declared independence, only to vote to unite with Romania in April. Bessarabia joined Greater Romania and the Romanians were really happy about it, whereas the Soviets refused to recognise Romanian rule over Bessarabia and became really pissed. They symbolically protested by creating a "Moldavian ASSR"

◊ on the border with Romania.

The Soviets then benefited from the 1939 Molotov-Ribbentrop Pact. On June 26, 1940, the USSR issued an ultimatum to Romania to withdraw from Bessarabia and Northern Bucovina. Romania had no choice and evacuated the region, which the Soviets took over and renamed the Moldavian SSR. Pissed, the Romanians allied themselves with the Germans and reoccupied it during the invasion of the USSR before getting kicked out again by the Soviets. The Soviets got to keep it after the war in exchange for recognising Romania's re-annexation of Northern Transylvania, essentially creating Romania's modern borders.

The Soviets restarted the old russification program, deporting many locals to Siberia and otherwise harassing them while bringing in Russians, Ukrainians and Gagauzes to compensate. They also created Moldova's modern borders by transferring its southern coast to Ukraine and leaving it without access to the sea.

Now here's where it gets tricky. The Soviets did all they could to try and obliterate the region's old identity. The Romanian alphabet was banned and replaced with the Cyrillic, for starters. Most importantly, the Soviets promoted the idea that the Moldovans and Romanians were two different ethnic groups, and even that the Moldovan language was different from Romanian. A completely laughable claim, but they had The Gulags and the Moscow Centre to make people believe that, essentially, 2 + Torture = 5.

The first step Moldova took to reassert itself once perestroika and glasnost got started was to adopt a law on August 31, 1989 declaring the state language to be Moldovan written in the Latin script. This was followed by free elections and eventually, after the failure of the 1991 Soviet coup d'état attempt, independence being declared on August 27, 1991. Romania became the first country to recognise it after a few hours - the Romanian authorities considered it a first step towards a future unification.

The atmosphere after the collapse of the USSR was filled with some optimism that the newly-proclaimed Republic of Moldova (well, it should more accurately be Bessarabia, but whatever) would reunite with Romania and finally rebuild the old Greater Romania. This scared the inhabitants of the region beyond the Dniester River, Transnistria, who were majority Russians and Ukrainians and were terrified of such a union. They themselves declared independence and a war was fought, mostly in 1992

note Here, Transnistria was backed by Ukraine and Russia, while Moldova was supported by Romania, predictably enough, which ended in a stalemate and Transnistria's de facto but unrecognised independence.

This war, combined with popular apathy, caution on behalf of the authorities and Romania's own political problems killed off the possibility of union between Moldova and Romania. Moldova began distancing itself from Romania starting in 1994, changing its national anthem from the Romanian one to another one, adopting a new flag (the Romanian flag with the Moldavian coat of arms) and the national language was changed back to "Moldovan". In response, the Romanian Chamber of Deputies adopted a declaration that basically bitched them out for chickening out on union and said that This Is Unforgivable!. And then everybody forgot about it. Now, the unionist movement still exists, it's stronger in Romania compared to Moldova, but most people on either side don't care very much about it. It doesn't help that a 2008 poll showed 61% of Moldovans rejecting union with Romania. Actually, it's probably for the best that union never happened - Moldova's the second poorest country in Europe (despite its steady annual growth in the 2000s) and got really screwed by the transition to capitalism, so if a union would've taken place it would've been like what happened to Germany, except with both countries having practically Third World economies.

Moldova's been struggling ever since with what exactly is its national identity (Romanian? Moldovan? Something in between? Take a Third Option?) and who it should look forward to (Europe? Russia?). It's hoping to join The European Union, but that probably won't happen for a while. 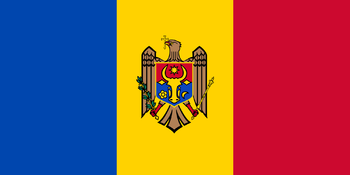 The blue, yellow and red reflects Moldova's past cultural ties with Romania. At the center is the national coat of arms.
Coat of arms of Moldova 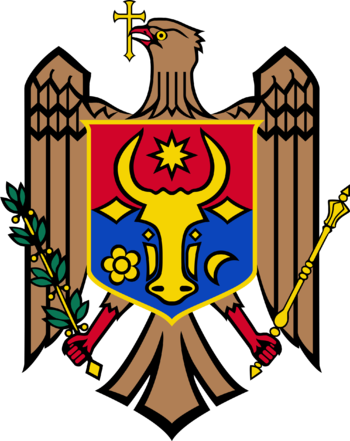 The coat of arms was adopted in 13 July 1990, it depicted an eagle holding a cross on its beak and an olive branch and a scepter on its claws; the shield borrows elements from that of Moldavia — the head of an aurochs