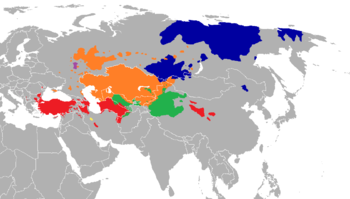 Originating from The Far East, the Turkic peoples are one of the world's most diverse, covering a wide variety of ethnic groups and languages across Asia and Europe. They are spread all across Western, Central, North and East Asia, as well as parts of Southern and Eastern Europe, spanning as far west as Bosnia to as far east as the Chukotka Autonomous Okrug of Russia, and have absorbed various other ethnicities, giving them a wide variety of phenotypes ranging from primarily Caucasian-looking (Azerbaijanis, Turks, etc.) to not far off from their East Asian roots (Kazakhs, Kyrgyz, etc.), but most of them share a common ancestry, cultural traits and historical backgrounds.

Capital & Largest City: Ürümqi
Culture
Much like the Mongols, which they share a mythology with, the Turkic peoples have a nomadic tradition with yurts, equestrian sports, livestock raising and archery being common, and holding a reverence for horses and warriors. The Turks' indigenous religion is called Tengrism, a type of ancestor worship revolving around a sky god called Tengri, and features horses, predatory birds like the eagle or falcon and wolves heavily in its mythology and symbolism. Tengrism is functionally extinct as a separate religion today, though there have been attempts at modern grassroots revivals, not unlike the neopagan movement of Europe.

From the time of their expansion from East Asia, the Turks began to be introduced to foreign religions. Since the Turks are (or used to be) nomadic and span large territories, the scope of the conversion is variable. In the 8th century, the Turks of Xinjiang were introduced to Mahayana Buddhism, Manichaeism, and Nestorian Christianity. The latter two are extinct, while Buddhism, although still existent, is little adhered by the region's Turks today. Around the same period, the Khazars of the Pontic-Caspian Steppe were theorized to have converted to Judaism. Although the idea is controversial,note mainly because it reeks of antisemitism. Some people have proposed that the Ashkenazim (who constitute 75% of today's Jews) are actually not descended from the ancient Jews at all, but instead from a mixture of Europeans and Khazars who fled to Europe. Needless to say, the idea can get politicized fast, especially in the context of Israel and Zionism. We're not going to touch the subject anymore than that. there are pockets of Jewish Turks in Crimea, which means that there used to be a Jewish state there. The 10th century saw what was probably the most game-changing event in Turkic history, with the conversion of the Kara-Khanids of Central Asia to Islam, facilitating the spread of the religion in Asia all the way north to Western Siberia. As a result, the Karluk, Kipchak, and Oghuz Turks were seamlessly integrated into the history of the wider Muslim world and they have not looked back since. Because they also have by the far the largest population among the Turks, Islam is today the majority religion of the Turkic peoples. Following this, Turks who still adhered to Tengrism underwent conversions in the early modern period. In the 16th century, Tsarist Russia expanded to Siberia and North Asia, causing many of their indigenous peoples, including the Turks to become Orthodox Christians. The conversion of Mongolia to Mahayana Buddhism in the 17th century also led to the same conversion to occur in a neighboring Turkic people, the Tuvans.

The cuisine of the Turkic peoples typically involves a lot of bread, meat and milk. As most Turkic peoples are Muslim, pork is generally avoided, and lamb/mutton is the meat of choice, though beef, fish (primarily in coastal areas) and even horse are also eaten. You've probably heard of doner kebab, one of the most popular fast foods in Australia, Europe, Japan and Vietnam, as well as it's Mexican, Greek and Arab derivatives, al pastor, gyros and shawarma. Yogurt is believed to have originated from the Turkic peoples, with it, doogh (a cold savory yogurt drink) and tzatziki (a yogurt-based dip/sauce/soup, often served as an appetizer or side) spreading from the Ottoman Empire to throughout Southern and Eastern Europe and Western and Central Asia. Turkish delight is also a popular snack in Southern and Eastern Europe and the Middle East, consisting of a cube of gel, often dusted with copra, icing sugar or powdered cream of tartar, made from starch and sugar often containing chopped dates, hazelnuts, pistachios or walnuts and often flavored with bergamot orange, cinnamon, lemon, mastic, mint or rosewater, as well as Baklava, a rich, sweet pastry made of filo and filled with chopped nuts, sweetened with syrup or honey and popular in Southern and Eastern Europe, North Africa, Western Asia and Central Asia. Pilaf is a favorite food among the Turkic peoples, consisting of rice, meat, vegetables and often spiced with berries and herbs.

History
The Turkic peoples originate from Manchuria, Mongolia and South Siberia, with the early Turkic language developing in Mongolia. The earliest mention of the Turkic peoples is the peripheries of the Xiongnu confederation, of which a considerable part are presumed to have spoke a Turkic language due to the absorption of foreign peoples, and whose territory included Mongolia and parts of China, eastern Kazakhstan and eastern Kygyzstan. The Xiongnu had the earliest known Turkic alphabet (although it does not appear that their elite were Turkic in origin), the Orkhon script, and genetic research on skeletons from a 2000-year old Xiongnu necropolis in Mongolia found individuals with similar DNA sequences as modern Turkic groups. While Turkic connection with the later Huns is disputed, many of their proper names appear to be Turkic in origin.

The Turkic peoples first came into focus with the establishment of the Turkic Khaganate in the 6th Century, with the first recorded use of the name "Turks" coming a Chinese text about trade between them and the Sogdians along the Silk Road. The Ashina clan, a Turkic tribe formerly from Li-jien (now Zhelai Zhai) in China and famed metalsmiths, had migrated to the Rouran Khaganate seeking inclusion in their confederacy and protection from the prevalent dynasty. Over the next century, they conquered the Rouran Khaganate and established the Turkic Khaganate. The Göktürks assumed leadership of the Turkic peoples and inherited the administrative experience and traditions of the Xiongnu, whom they were formerly in the nomadic confederation of, and united the nomadic Turkic tribes into the Göktürk Empire, the first state known as "Turk", with the Göktürks being the first Turkic people to write Old Turkic in the Orkhon script. They quickly spread west across Central Asia to the Caspian Sea, and then split into the Eastern and Western Turkic Khaganates during a civil war in Manchuria and Mongolia. The Eastern Turkic Khaganate was overthrown by the Han Chinese, and later the Second Turkic Khaganate was formed, ruling over large parts of the former Göktürk area, until it was weakened by several wars between the Turks, Chinese and Tibetans and replaced by the Uyghur Khaganate in the year 744.

The Uyghur Empire was when Turkic peoples started mixing with Caucasoid peoples like the Eastern Iranians and Tocharians, the original inhabitants of the Tarim Basin in Xinjiang, with the Bulgars, who had established themselves between the Caspian and Black Seas, mixing with the Volga Finns in what is now Tatarstan to become the Volga Bulgars and the Southern Slavs in what is now Bulgaria. At the same time, the Shatuo Turks emerged as a power factor in Central and Northern China and were recognized by the Tang Empire as allied power. The Uyghur Empire later fell after several wars in 840, and with the fall of the Tang Dynasty in 907, the Shatuo Turks replaced them and created the Later Tang Dynasty in 923, ruling over much of northern China, including Beijing, and adopted Chinese names and united Chinese and Turkic traditions. At the same time, the Volga Bulgars became an Islamic state, and the Kara-Khanids of the south soon followed, introducing Islam to the Turkic peoples, who had formerly followed Tengrism. While the Later Tang Dynasty fell in 937, the Shatuo rose to become one of the most powerful clans of China, creating several other dynasties including including the Later Jin and Later Han, before they were conquered and assimilated into the Han Chinese by the Song dynasty.

The conversion of Karluk and Oghuz Turks to Islam caused many Muslim Turkic empires to appear in Central, South, and West Asia. This was primarily driven through the military, in which the Turks were dominant, while the central bureaucracy was Persianized through contact with Iranian peoples. Turkic empires of Central Asia (most notably, the Khwarezmians) were site of some of the greatest achievements of the Islamic Golden Age. The Seljuk Empire, which had its roots in Northeast Iran, would conquer Anatolia from the Byzantine Empire in 1071, before declining in 1150–1250 and being invaded by the Mongols in 1260, who divided Anatolia into beyliks. One of these beyliks, the Ottomans, would eventually conquer the rest, and now you know how the Ottoman Empire and later Turkey came into being.

Outside of Anatolia, the Turks continued to make a name for themselves. Two of the four rump states of the Mongol Empire (the Chagatai Khanate and the Golden Horde) were eventually Turkicized, meaning a half of the Eurasian landmass was under Turkic dominion. The Timurids who rose in the 14th century and claimed descent from Genghis Khan was also founded by a Persianized Turk, as was its offshoot, the Mughals of India. The Safavid dynasty, who became Iran's greatest "indigenous" dynasty since the era of the Sassanids, was actually founded by a bunch of Shia Muslim Turkomans (today, we call them the Azerbaijanis). Egypt was ruled by a dynasty of Turkic slave origin (Mamluks) until the late 14th century, when the Circassians took over.

The Turks began to lose power in the early modern period, with the emergence of industrialized European states. The Russians broke out of the Tatar Yoke in the 16th century and slowly conquered the European, Central Asian, and Caucasian Turkic states throughout the next three centuries. The Mughals fell to the British in 1857, therefore ending the nominal Turkic presence in the Indian subcontinent. The Ottoman Empire was slowly gobbled up and eventually destroyed during World War I. The last Turkic dynasty of Iran, the Qajars, was toppled in 1925. From 1923 to 1991, the Republic of Turkey was the world's only internationally recognized Turkic country. After the Hole in Flag, five Turkic republics popped up from the remnant of the Soviet Union. Outside of independent republics, there are also autonomous provinces in non-Turk countries where Turks are recognized, including ten in Russia and one each in China, Moldova, and Ukraine.

The Turkic languages are written in a variety of alphabets, ranging from the Arabic script (Uyghur), to the Cyrillic Alphabet (Kazakh, Kyrgyz, etc.), to the Latin alphabet (Turkish, Azerbaijani, Uzbek, Turkmen, etc.). Despite the geographic scope of their speakers, compared to Indo-European, Turkic languages are very close to each other, even if not exactly mutually intelligible, and lexical cognates are easily recognized.