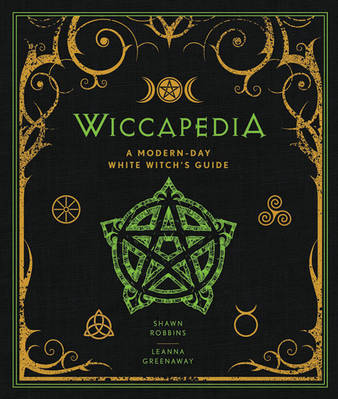 Book on Wicca religion. References to Wikipedia are possibly intentional. References to Satanism are definitely unintentional. Bear in mind that all the symbols are derived from pagan cultures that existed before Abrahamic religions.
Advertisement:

open/close all folders
Wiccan Holidays
Yule is the Winter Solstice and is celebrated on December 21. During this time the Goddess gives birth to her son, the God. In ancient times Yule was viewed as the day when daylight would become progressively longer and symbolized the forces of light turning the table on the forces of darkness.

Imbolc, celebrated on February 2, is a wonderful time of year. First of all don't forget to bless the Goddess. She's starting to show signs of recovery from her pregnancy and is looking forward to returning to all her daily activities. Also don't forget to stop and see that little guy of hers. He'll be grown before you know it. Why he was born almost six weeks ago and he's already grown from an infant to a little kid. She sure has her hands full with him. If you're lucky you might be able to find him frolicing among some early rising squirrels. Just wait, little guy, until Ostara gets here. I bet your mother can't wait to show you your very first spring.

Ostara, the Spring Equinox, is celebrated on March 21. What a glorious day to be alive. The Goddess is fully recovered now and ready to usher in spring with the awakening of the wild life and animals. Speaking of animals they sure didn't miss out on who the new guy is around here. Rejoice for the God is alive and well. Soon he will be back to his old self again. Remember to breath in the fresh air filled with the balance between the forces of light and the forces of darkness. Who knows when you'll get another opportunity to enjoy this.

Beltane (or Beltaine), celebrated on May 1, is... hold on a second. Where are our God and Goddess? Ah, I see them now. Okay, folks, we better give them some privacy if you know what I mean. Sweet love is in the air today.

Litha, the Summer Solstice, is celebrated on June 21. It is the longest day of the year, when the God is most powerful. At the same time this is also the time of year when the nights become longer and the darkness increases in power. The Goddess and God are expecting child at this time of year, as the Goddess is pregnant with their son and the fall harvest. The harvest is fast approaching again and the people will be calling on the God to perform his duty to mankind. For now though lets not think about that. Rejoice for at no other time of year is the God as powerful as he is today.

Lammas, celebrated on August 1, brings both great and terrible news. The year's crop is ready to begin harvesting and ensure the people through the year. However, remember for each plant you rip from the ground, you're injuring the God more and more. It sucks having to go to a funeral after work. Thank you God for all you've given us.

Mabon, the Fall Equinox, is celebrated on September 21. The darkness and light are again equal at this time of year except this time the darkness will win out. People become increasingly aware of winter and they continue the harvest, that was started at Lammas. The Goddess is both sad and happy - sad for the loss of her husband and happy for the prospects of their unborn son.

Samhain, known as Halloween to the rest of the world, is celebrated on October 31. During this time the veil between the realm of the living and realm of the dead is at its thinnest. The God who had previously died leads the souls of the dead into the great beyond.

Tree Metaphor
Wiccans see the God and Goddess as symbolizing a duality similar to the yin/yang of Taoism (i.e., light/darkness, order/chaos, strong/weak).

The last optional characteristic to assign to the God and Goddess is that they are both aspects of some unknowable being who can't be classified into male or female.

There are two types of polytheism and Wiccans can be either one: A common method Wiccans use to explain the concepts of polytheism and pantheism is to think of a tree. The trunk of the tree, where it first rises out of the ground, can be seen as the unknowable god head. As your gaze goes farther up the tree, you see it splits into two branches. These two branches can be seen as the God and Goddess. As your gaze goes farther up the tree, the two main branches have lesser branches branching off them. These lesser branches can be seen as all the gods and goddesses that have been worshiped throughout history.
Advertisement:
God Head
The unknowable god head varies from Wiccan to Wiccan. Some see it as a source that everything flows out of like a river. Others view it as the whole of the pantheistic universe. There are those who see it as similar to a deist god. Some don't have any beliefs regarding the unknowable god head. Whatever they choose, Wiccans don't spend their time trying to get to know it. Instead they focus on the God and Goddess.