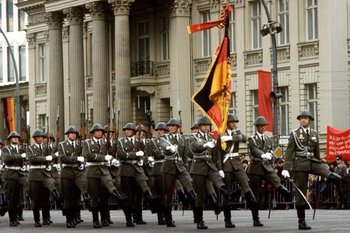 During its (relatively) brief existence, East Germany maintained an armed forces, the Nationale Volksarmee (NVA - National People's Army), which was considered among the most formidable in the Warsaw Pact. Given their frontline role in the Cold War and East Germany's prominent position within the Communist Bloc, the NVA usually received full-standard Soviet versions of the USSR's latest weapons systems rather than downgraded export models.

After German Reunification, the Bundeswehr and their NATO allies had a field day testing and analysing the NVA's Soviet hardware. Although a great boon to NATO intelligence, the vast majority of the NVA's Warsaw Pact-standard equipment was deemed to be of little practical value to the Bundeswehr and after testing was either scrapped, retired to museums or sold to allies who did have a use for it; for example, the Greek Army received most of the NVA's inventory of 9K33 Osa (SA-8 "Gecko" to NATO) mobile surface to air missile systems. The big exception to this trend were the NVA's MiG-29 "Fulcrum" jet fighters, which remained in Luftwaffe service for over a decade, finally being retired and transferred to the Polish Air Force (already a large MiG-29 operator and happy to receive well-maintained extra airframes at the token price of one Euro apiece -to comply with international laws against donating weapons systems for free-) in 2003-2004.

After Reunification, relatively few NVA personnel (and none above the rank of lieutenant colonel) remained in the Bundeswehr, and the 3,200 or so who did remain all took a one-rank demotion. Many former NVA personnel feel bitter over aspects of their treatment after Reunification. Until 2005, service in the NVA was classified as service "in a foreign military" and did not count towards the same federal pension benefits Bundeswehr veterans would receive for equivalent periods of service. Former NVA officers are also not allowed to append their rank to their name as a professional title, even though the same restriction was never placed on Wehrmacht veterans.

The NVA are also notable for their uniforms, which bore a strong resemblance to those of the Wehrmacht. To be fair for them, while their uniforms have definite Soviet influence, they along with Poland never adopted the Russian-style epaulets that other Warsaw Pact countries adopted. The Stahlhelm helmet design of the Wehrmacht was ditched in favor of the M1956 design (both to avoid association with the Nazi regime and to differenciate enough from the Bundeswehr, which used Stahlhelm surplus for a while), which, ironically, was developed in Nazi Germany but never put into use up until that point.

The East German armed forces frequently appear in Cold War era western spy and military fiction, but their portrayal in pop culture is now something of a Dead Horse Trope for obvious reasons, save for historical fiction and the occasional work which revisits the Cold War-gone-hot World War III scenario as Alternate History.