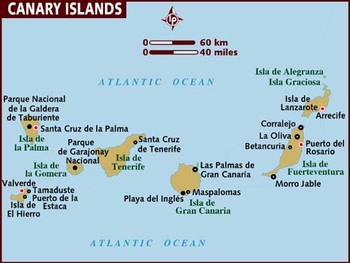 A series of volcanic islands west of Morocco, the Canary Islands (Spanish: Las Islas Canarias) are an autonomous community of Spain off the northwestern coast of Africa, the southernmost region of Spain, one of the eight regions with special consideration of historical nationality recognized as such by the Spanish Government and an outermost region of the European Union. The island of Tenerife is largest and most populated of the islands, and the territory has two capitals, Santa Cruz de Tenerife and Las Palmas de Gran Canaria, which also act as the capitals for the Spanish provinces of Santa Cruz de Tenerife and Province of Las Palmas respectively, with Las Palmas also being the largest city of the territory.
Advertisement:

The islands are a major tourist destination, with desert and subtropical environments, great beaches and important natural attractions like Mount Teide, the highest mountain in Spain and third tallest volcano in the world measured from its base on the ocean floor, and the Teide National park, with about 12 million people visiting the region per year. During the Spanish Empire's time, the Canary Islands were also the main stopover for Spanish galleons on their way to the Americas, which came south to catch the prevailing northeasterly trade winds. 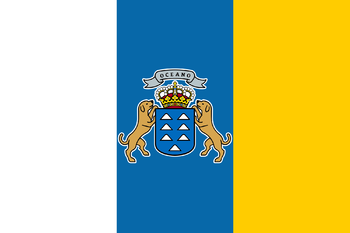 Designed by Carmen Sarmiento and her sons Arturo and Jesus Cantero Sarmiento during the Canarias Libre movement of the 1960s, this flag is a tricolor of three equal bands of white, blue and yellow, combining the blue and white colours of the Province of Santa Cruz de Tenerife (Province of Canary Islands) with the blue and yellow colours of the Province of Las Palmas, and features the coat of arms of the Canary Islands in the center blue band.
Advertisement: