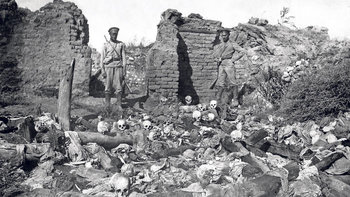 Notice the skulls.
"You Armenians... never forgot where you live... you accursed ones have brought many perils on the head of our esteemed government... paved the way for foreign assault... You must know that the Young Turks have awakened now... Turkish youth... shall not delay the execution of their assigned duties... The Turkish sword to date has cut down millions of giavours, nor has it lost its intention to cut millions more hereafter. Know this that the Turks have committed themselves, and have vowed to subdue and to clean up the Armenian giavours who have become tubercular microbes for us."
—Huseyin Azmi, Director General of the Istanbul Police, in two letters to the Armenian Patriarch in Istanbul (12 November 1913)
Advertisement:

The Armenian Genocide was the deliberate, systemic mass murder of around 1 million Armenian Christian subjects of the Ottoman Empire, along with hundreds of thousands of Greeks and Assyrians, around the time of World War I. The mass murder led to the creation of the word genocide, and led to a government being accused of crimes against humanity for the first time.

open/close all folders
Origins, Ottoman Armenia, pre-1800s
Armenian civilization is one of the oldest in the world, dating back a few thousand years, and had been placed under the control of various empires, from the Persians to the Ottomans.

By the 16th century, the Ottoman Empire came to rule Armenia. While Ottoman authorities more or less tolerated the Armenians, granting them autonomy and some religious freedom, Armenians were often persecuted by their Turkish and Kurdish neighbors, who saw them as second class citizens for not converting to Islam.

It's economy, administration, and soldiers increasingly fell behind the modern industrial powers of Western Europe.

Many of its non-Muslim subjects began seeking autonomy or outright independence, and Russia, Britain, and France began squeezing and coveting the Ottoman territories while proclaiming themselves to be the defenders of the Christian subjects of the Empire.

The Ottoman Empire attempted various reforms, including the creation of a (rubber stamp) parliament, decriminalization of homosexuality, and the modernization of its institutions. However, none of these reforms were enough to placate the desires of various minorities and push back many of the encroaching European powers.

Armenians themselves became increasingly restive during this time period. The rising interest in nationalism prompted demands from Armenian subjects who, for the most part, wanted laws protecting them from persecution by their Muslim neighbors.

The Russo-Turkish War marked a turning point. In the Congress which became known as the Armenian question. While ultimately nothing concrete emerged, for many Armenians led to the further growth of Armenian nationalism.

The loss by the Ottoman government of many of its territories in the Balkans, as well the growing autonomy of their Balkan peoples, led them to increasingly distrust the Armenians, who they saw as puppets.

Advertisement:
Early Massacres and the Young Turks, 1890s- 1913
By the 1890s, the persecution of Armenians began reaching a fever pitch under Sultan Abdul Hamid II. He rejected the Constitutional Reforms and blamed the problems of his domain on the Armenians.

In 1894, he organized a paramilitary force called the Hamidiye to put down Armenians. Between 1894 and 1896, the Hamidiye would organize, through incitement and deliberate provocation of Armenians, several massacres that would kill somewhere between 80,000 and 300,000 people.

Then in 1908, the Young Turk Revolution occured, and forced Hamid II to accept a new constitution. The Revolution was supported by many of the minorities within the Ottoman Empire including Armenians. Many factions supporting rights and autonomy for the peoples of the Empire.

But then the Sultan tried to regain power in a countercoup in 1909. The Sultan was overthrown, but not before his supporters massacred between 15,000 and 30,000 Armenians in the Adana Province.

The Young Turks, led by the Three Pashas of the Committee of Union and Progress, were supporters of a secular, modernized Turkey. However, they were also nationalists who saw the diversity of Anatolia as a threat to the survival of the Turkish race.

After the Balkan Wars of 1912 and 1913, the Ottomans lost almost all their remaining European territories, which raised the paranoia of the Young Turks even more. The Muslim refugees produced by this conflict flooded into Anatolia, which convinced even more Turkish people of the need to deal with the threat of non-Turks while they still could.

World War I and Caucasus Front, 1914- 1915
The Ottoman Empire entered the war on behalf of the Germans, and the Young Turks revealed themselves to be militarily incompetent. Enver Pasha's campaigns against the Russians in the Caucasus ended in complete disaster.

At the Battle of Sarikamash, Ottomans were not only routed, but many of them froze to death in the brutal Russian winter. Enver Pasha, rather than take responsibility, blamed the Armenians for his defeat. This was despite the fact that an Armenian soldier saved him from certain death.

By 1915, Armenian civilians were being sent to labor battalions that were almost certainly death sentences. At the siege of Van, an entire community of Armenians resisted what was an obvious attempt by the authorities to kill them, and had a siege that lasted until Russians occupied the territory.

This only solidified the idea that the Armenians were a dangerous fifth column in the eyes of the Ottomans.

The Killing, 1915- 1918
On April 24. 1915, hundreds of Armenian elites in Constantinople were arrested en masse and later executed. This marks the official start date of systematic massacres.

In the summer, hundreds of thousands of Armenians would be marched through the Syrian desert without food or water in what was an obvious attempt to kill them through starvation and dehydration. The survivors were left to die in concentration camps, and many women and girls fell victim to rape.

The Assyrians and Greeks of the Ottoman Empire fell victim to similar atrocities as well.

These massacres instantly became known throughout the world, with everyone from Henry Morgenthau to Teddy Roosevelt condemning these atrocities. On May 24, the Allied Powers jointly condemned these acts as "crimes against humanity and civilization," the first such statement made in wartime from one group of nations to another.

The Turkish War of Independence, 1918- 1923
At the end of World War I, the Ottoman Empire lay defeated. The Treaty of Sevres led to the division of Anatolia into different zones of control. The nascent Republic of Armenia, which emerged in the power vacuum created by the Bolshevik Revolution, had been given a lot of territory in Western Anatolia.

However, Ataturk rejected the division of Anatolian Turkey among various powers and launched his war of independence. That, and the Azerbaijan and Armenian War, led to not only further deaths, but the eventual end of Armenian civilization in Anatolia.

The encroaching Soviet army, which formed an alliance with Ataturk, quickly erased the early Armenian Republic, and much of their lands were ceded to Turkey. In the final act of destruction in 1922, Smyrna, which had been the last stronghold of Greek forces in the war and the last remaining Greek communities in Asia Minor, was invaded and burned, with all its Greek and Armenian residents murdered or driven into exile.

Aftermath
The Pashas were charged by a tribunal with murder, but were able to escape justice. Two of them were assassinated in Operation Nemesis, a plot by vengeful Armenians to kill the perpetrators. Enver Pasha himself was killed by an Armenian Red Army Bolshevik, Yakov Melkumov (AKA Hakob Arshaki Melkumyan), during the Russian Civil War where he had been attempting to raise anti-Communist armies in Central Asia. The rest of his forces and other Pan Turkic supporters in the former Russian empire were finally defeated by the Soviet Bolsheviks in the final stages of the latter's victory in the Russian Civil war and aftermath, ending a decades long Russo-Turkic conflict that had planted the seeds of genocide. However, almost none of the grunts who engaged in the genocide were charged with any serious crime.

A 1923 agreement between Greece and Turkey led to a population exchange in which a million Greeks in Anatolia were forced into Greece, and half-a-million Muslims in Greece were sent to Turkey, paving the way for Turkey to become an ethno-nationalist state.

Ataturk and his successors continued the precedent of Turkification set by the Pashas. Laws enacted by the Ataturk government continue to exclude and marginalize the remaining Greeks and Armenia communities. The government launched a pogrom against the Armenian and Greek communities in Istanbul in 1955. The Turkish government has continued to deny that a genocide ever occurred, and those who have tried to bring the facts to light can be imprisoned or even killed.

Turkey's coverup and the world's reluctance to do much against the new post Ottoman Turkey was also arguably one of the reasons why Adolf Hitler felt he would not face any long term punishments for the Holocaust, though history told a different story with the Nazi perpetrators being brought to justice. Thus, many Armenians called for Nuremberg-style trials against still living perpetrators of the genocide, with modern Armenians now at least hoping for a rapprochement with Turkey that Germany took with the Jews.

, and does not consist only of mass killings but any act with the long-term goal of eliminating an ethnic or religious minority and their history, one could argue Turkey’s policy of denial (the final stage of genocide), its continued persecution against non-Turkish minorities, and the anti-Armenian policies by both Turkey and its Turkic neighbor Azerbaijan, is a continuation of the genocide into modern times.