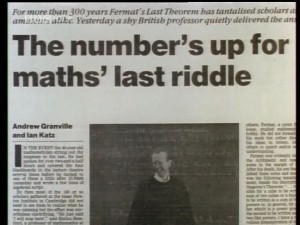 The USSR, Apartheid, and now this. Is Nothing Sacred?
Cubum autem in duos cubos, aut quadratoquadratum in duos quadratoquadratos, et generaliter nullam in infinitum ultra quadratum potestatem in duos eiusdem nominis fas est dividere cuius rei demonstrationem mirabilem sane detexi. Hanc marginis exiguitas non caperet.
("It is impossible for a cube to be the sum of two cubes, a fourth power to be the sum of two fourth powers, or in general for any number that is a power greater than the second to be the sum of two like powers. I have discovered a truly marvelous demonstration of this proposition that this margin is too narrow to contain.")
— Pierre de Fermat
Advertisement:

In Layman's Terms, take this equation: an + bn = cn, where a, b, c and n are all positive whole numbers. While there are infinitely many cases where this equation is true when n = 1 (which is simple addition) or n = 2 (called the Pythagorean triples

), the Last Theorem says that there is no solution if n is greater than 2. The problem was to solve the theorem, either by proving it or by producing a counterexample. Despite monumental interest and attention from the mathematical community, nobody managed it for three and a half centuries.

Fermat, a prominent 17th-century amateur mathematician, wrote the above note in his copy of a number theory textbook. By the time he died, the textbook was full of such teasing notes; his son published a new annotated edition of the book containing all of these notes in their proper places. For nearly all the notes, it didn't take long for other mathematicians to figure out what Fermat was talking about. The quoted one was the exception. As such, it became known as Fermat's last theorem—"last" not in the sense that it was the last mathematics he ever did (he almost certainly wrote the note fairly early in his life) but in the sense that it was the last claim he made to remain unproven. It took until nearly 350 years after Fermat's death until mathematicians Andrew Wiles and Richard Taylor released a proof in 1994. The proof's effect in fiction that referenced it was a mess-up — most works set in the future just assumed the Theorem would remain unproven for centuries, millennia, or even forever.

In fact, it's almost certain that Fermat himself didn't really have a proof. Wiles' proof certainly would have been inaccessible to Fermat; it relies on mathematical concepts which weren't developed until after World War II. Romantically, one might imagine that Fermat had come up with some simple proof that has since eluded everyone else. In reality it's far more likely that he was mistaken, especially since later in life he went to the effort of working out a proof for a certain special case (that no fourth power can be written as the sum of two fourth powers)note Though he could still have had a general proof for all odd numbers or odd primes, since proving the case for all odd numbers/primes and 4 would prove Fermat's last theorem for all cases. In fact, 19th-century mathematician Gabriel Lamé had a flawed proof attempt that could have been much like Fermat's — the idea is just about practicable for a brilliant 17th-century mathematician, whereas the flaw in it is a rather subtle technical matter that escaped just about everyone even in the 19th century.

, which states that all elliptic curves have an associated modular form. By the mid-20th century, the remaining unproven case for the equation was for all prime values of n, any of which will be referred to as p. Additionally, it was shown that if p is odd (and thus a counterexample to the theorem since 2 is the only even prime number), then a, b, c, and p can be used to produce an elliptic curve. It was proven in 1986

by Ken Ribet, building on prior work by Gerhard Frey and Jean-Pierre Serre, that the p elliptic curve could never have a modular form. Wiles was eventually able to prove

that the Taniyama-Shimura Conjecture was true for the specific type of elliptic curve which the equation was tied to. This created a contradiction with the parameters established by Ribet's theorem, meaning that the p elliptic curve couldn't actually exist. This meant an odd prime counterexample to Fermat's last theorem couldn't exist, thus proving it. The "eventually" is because, when Wiles' first proof was being peer-reviewed, a flaw was discovered. Even with help from Richard Taylor, the problem stymied him so badly that he almost gave up on it before having a "Eureka!" Moment regarding two of the mathematical techniques he'd used and how they could shore each other up, which led to the fix he needed. The updated proof was published a year later and was found to be correct.

There's often this idea in fiction that Wiles' proof is somehow incomplete or not good enough. No currently unsolved problem in mathematics has a story behind it that's nearly as good as Fermat's mysterious margin note, so it can be useful to pretend that Fermat's last theorem remains unsolved. Admittedly, the complexity of the proof compared to the simplicity of the statement makes it appear inelegant. Note, however, that mathematics

whose best-known proof is massively more difficult and complex than the statement of the theorem itself; Fermat's last theorem is by no means unique in this regard.

Among remaining unsolved problems in math, the Riemann Hypothesis

probably comes closest to having a story behind it nearly as good as Fermat's last theorem, though understanding its statement requires rather more background.

Not to be confused with Fermat's Little Theorem

, which can be proved convincingly on the back of a postcard.