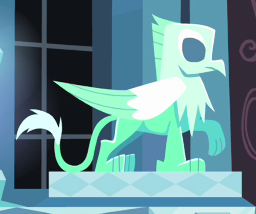 is a short story based on My Little Pony: Friendship Is Magic describing the experiences of a pony mathematician named Silver Compass during his visit to a blockaded province of the Griffon Empire. A province that has been effectively occupied by strange creatures calling themselves 'humans'. During his stay here, not only does he encounter the works of a society that chose a drastically different direction of development compared to that of Equestria, but also learns about the events that immediately followed the first contact.