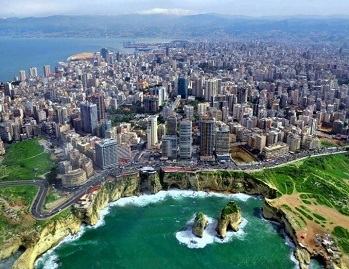 Beirut (Arabic: بيروت) is the capital and largest city of Lebanon and the most diverse city in The Middle East. During the Cedar Revolution of 2005, cynics noted the presence of Arab women in revealing outfits. People who knew Lebanon were amused at the cynics' cynicism; the Lebanese in general are famously tolerant (when they're not shooting at each other), and the Beirutis most of all.
Advertisement:

Beirut is mostly known because of the civil war. Suicide bombing as a military tactic started here, the most notable case being the attack on U.S. and French Marines in 1983. This is really rather unfortunate, since the Beirutis themselves would prefer you ignored the occasional outbreaks of violence and focused on the important things—like Beirut's bustling business scene (because the city is in a good spot for trade, and also because the Lebanese diaspora gives it business contacts everywhere), culture (numerous artists and publishers—the old chestnut in the Arab literary world is that Egypt writes, Lebanon prints, and Iraq reads), and nightlife (something for everyone: even if you don't drink, the coffeeshops can accommodate you with any herbal beverage you care to name...and sometimes other "herbal" items as well, if that's your thing). And don't forget the amazing food—the Lebanese kitchen is famous the world over for good reason, and the Beirut restaurant scene shines at every level, from fancy sit-down places with napkins down to street stalls slinging kebab and falafel. Oh, and the outbreaks of warfare? Good for the construction business.